I was working at the Kelvingrove today with G.I.
My contemplations for the day were decided at 10.39 this morning, when the first visitor approached Simon Martin’s work.
The elderly gentleman, who was accompanied by his young grandson, asked me to explain it to him.

Having learned more about the work, I launched in:
(Man in bold.)

The Kelvingrove dates back to the Victorian era, when it held a very dry presentation of objects. Today it boasts a remarkably bizarre curatorial approach. In an attempt at a more socially engaging display, modern and everyday objects are dispersed among the historical relics. One can see an African votice doll displayed next to a 21st century packet of lemsip. These two objects are linked by their attributes denoting healing and medicine. The lemsip is a recognisable object and therefore allows accessibility to its partnered relic.
Simon Martin acknowledges this strange curation in his ‘Untitled’ work and inserts the everyday–

“But he’s just gone and placed a lemon over that nice image of an African sculpture. Now I can’t see the image!”

Well…Martin’s work aims to address behaviours of personal collection and our own assignation of value. Haven’t you ever held onto an obj–

“Yes, but I wouldn’t film a lemon and say its art. I’d rather see the image. That’s just a lemon.”

Well…its what the lemon can do– 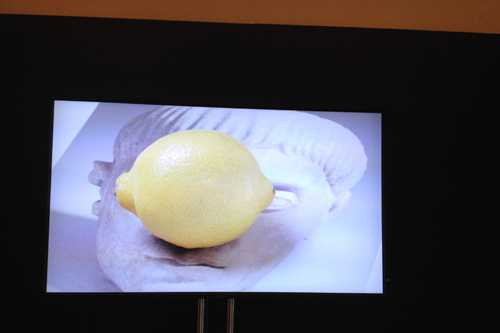 “I was in London a wee while back and there was this bed in a gallery, with a load of rubbish on it!”

“This artist has just put lemons on a book–“

Let me show you upstairs. There’s some Dutch paintings and a display of Scottish Colourist works!

The man was very offended by Martin’s insistence of placing a lemon over an image of a historical artefact. He was a nice man and I understood his discomfort. He wanted to see a skilled hand, whereas Martin’s work is more conceptual. Although I love the piece, it just isn’t always accessible to the general audience.

I later went upstairs to scout the paintings I’d sent the man to, which I’d yet to see myself. 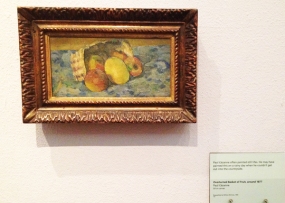 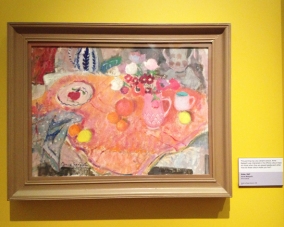